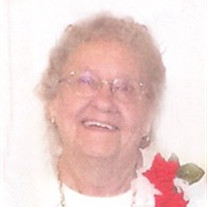 
She was preceded in death by her parents and one brother, Irvin
"Bob"Condre.


A homemaker, Norma did seamstress work and made wedding dresses
out of her home for people in the community.


Norma enjoyed the sport of drag racing and was a huge John Force
fan. She also was a big Elvis fan and collected Elvis
memorabilia.


Funeral services will be held at 11:00 a.m. on Friday July 12,
2013 at the Knapp-Johnson-Harris Funeral Home in Roanoke. Pastor
Charlie Graul will officiate. Visitation will be held from 9-11
before the services at the funeral home. Per her request cremation
rites will be accorded and burial of ashes will be in Roanoke
Township Cemetery at a later date.


Memorial Contributions may be made to the Roanoke Ambulance Squad.
Online condolences may be sent to the family at www.knappjohnsonharris.com.

To send flowers to the family or plant a tree in memory of Norma Craps, please visit our floral store.

To send flowers to the family in memory of Norma Craps, please visit our flower store.