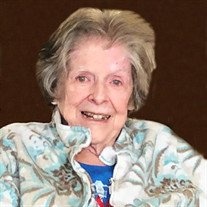 Metamora - Norma Katherine Rogers, 85, formerly of Peoria, passed away at 10:25 pm on Friday, December 18, 2020 at Snyder Village Health Care where she was a resident.

She was born on August 28, 1935 in Everett, Massachusetts to Frederick and Minnie Nee Barnes.

She was preceded in death by her parents and her ex-husband Jack Rogers.

Prior to her marriage, she had worked as an Airline Stewardess for Trans World Airlines then became a member of TWA's Clipped Wings International Inc.

Norma attended college later in life while continuing to work full-time. She earned a Bachelor's in Business Administration from Elmhurst College in 1986. Among the companies she worked for was MicroMold Manufacturing in Villa Park, Illinois and Gottlieb (Arcade Game) Corporation in Northlake, Illinois. Her most recent job, prior to her retirement in 2001, had been working for McDonald's Corporation in Oak Brook, Illinois. Within a year of her retirement, she moved from Villa Park to Peoria to spend more time with her only granddaughter, Samantha. She was also an opera aficionado and over the years enjoyed attending many operas.

The family would like to thank the staff at Snyder Village for all the love, care and support that had been given to their mother during her stay at the home.

Cremation rites will be accorded and, due to COVID-19 restrictions, a celebration of life service will be held at a later date. Knapp-Johnson-Harris Funeral Home in Roanoke is assisting the family with arrangements.

Memorial contributions may be made to St. Jude Children's Research Hospital or to Snyder Village Health Center. Online condolences and tributes are encouraged to be sent to the family at knappjohnsonharris.com

To send flowers to the family or plant a tree in memory of Norma Rogers, please visit our floral store.

To send flowers to the family in memory of Norma Rogers, please visit our flower store.