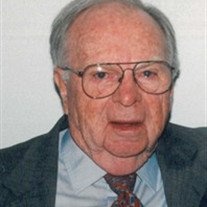 Interment will be in Park Hill Cemetery in Bloomington.
Kibler-Brady-Ruestman Memorial Home is handling
arrangements.

In addition to his wife Dorothy, Norman was preceded in death by
his parents.

He graduated from Franklin High School in Franklin, IL and then
attended a trade school. Norman worked as a design engineer for 25
years at the Eureka Company. He has had several patents associated
with his name for the Eureka Company.

Norman was a member of Trinity Lutheran Church in
Bloomington.

He was an avid St. Louis Cardinals fan, loved to listen to
country music and to play the guitar and harmonica.  In his
younger years Norman loved hiking and camping and just being
outside.

Norman was a frugal man, but was very generous when it came to
helping others. He was a man of few words, but will be deeply
missed for his sense of humor by his family and friends.

In lieu of flowers, memorial contributions may be made to
Trinity Lutheran Church in Norman's name.

You may share your memories of Norman and leave condolences for
the family at kiblerbradyruestman.com.

To send flowers to the family or plant a tree in memory of Norman P. Butcher, please visit our floral store.

To send flowers to the family in memory of Norman Butcher, please visit our flower store.