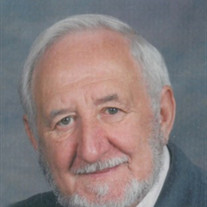 He was preceded in death by his
parents, and Dawn and Carol.

Orville proudly served his country
in the U.S. Air Force.

He was a printer for many years at
Bloomington Offset and Original Smith Printing.

He was a lifelong member of Trinity
Lutheran Church in Bloomington, the American Legion and Twin City
Cruisers.   He enjoyed woodworking and fishing and his
"64 Mustang.

A memorial service will be held at
Kibler-Brady-Ruestman Memorial Home at 11 a.m. on Saturday,
February 15, 2014 with Pastor Chris Nitzel officiating.

Cremation rites have been
accorded.  Inurnment will be at a later date at Park Hill
Mausoleum in Bloomington.

In lieu of flowers, memorials may
be sent to the American Cancer Society.

Online condolences may be left for
the family at kiblerbradyruestman.com.

To send flowers to the family or plant a tree in memory of Orville D. Schenkel, please visit our floral store.

To send flowers to the family in memory of Orville Schenkel, please visit our flower store.