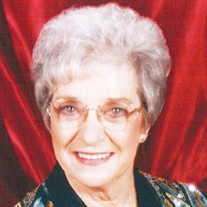 Roanoke- Patricia A. Paterson, 86, of Roanoke, passed away on August 23, 2020 at OSF Richard Owens Hospice Center in Peoria.

She was born on December 10, 1933 in Springfield, IL to John and Mary Catherine Gooch Smith. She married Billie D. Deavult and Robert Haw who both precede her in death. She then married David K. Paterson on November 13, 2002. He survives.

She was preceded in death by her parents; two brothers, John Smith; Raymond W. Smith; and one sister, Catherine Cunningham.

Patricia was a homemaker most of her life, but also worked in the dry-cleaning business and had been a bus driver's aid for Peoria School District unit #150.

She loved ballroom dancing, crocheting, traveling, and just sitting outside enjoying the outdoors. She was a member of the Roanoke United Methodist Church.

Private family services will be held at a late date and burial will be in the Roanoke Township Cemetery. Knapp-Johnson-Harris Funeral Home in Roanoke is assisting the family with arrangement.

Memorial contributions may be made to the Alzheimer's Association. Online condolences and tributes may be sent to the family at knappjohnsonharris.com.

To send flowers to the family or plant a tree in memory of Patricia A. Paterson, please visit our floral store.

To send flowers to the family in memory of Patricia Paterson, please visit our flower store.