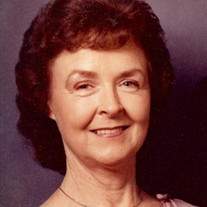 She was preceded in death by her parents, and one son Jerome
Wright who passed away on April 2, 2003.

Patricia graduated as valedictorian of her class from Minonk
High School in 1944. She was a homemaker who enjoyed helping on the
family farm.

After her husband passed away she moved into Westminster Village
in Bloomington where she met many new friends and enjoyed her time
spent there. The family would like to extend their thanks to the
staff of Martin Health Care Center for the excellent care and
attention that was given to Patricia while there.

Funeral services will be held at 1:00 pm on Tuesday April 2, at
Ruestman-Harris Funeral Home in El Paso. Fr. Roger Corpus will
officiate. Visitation will be from 12-1 pm on Tuesday before the
services at the funeral home. Burial will be in Evergreen Cemetery
in El Paso.

Memorial Contributions may be made to Westminster Foundation,
2205 East Lincoln, Bloomington, IL 61701. Online condolences may be
sent to the family at ruestmanharrisfuneralhome.com.

To send flowers to the family or plant a tree in memory of Patricia Wright, please visit our floral store.

To send flowers to the family in memory of Patricia Wright, please visit our flower store.