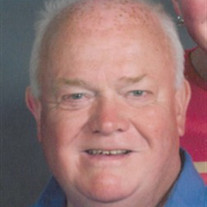 In lieu of flowers, memorials may be made to Concordia
Lutheran High School, 4245 Lake Ave,  Ft. Wayne, IN 46815 or
to Trinity Lutheran Church in Bloomington.  The family of Phil
has entrusted Kibler-Brady-Ruestman Memorial Home in Bloomington
with the care of their loved one.

Survivors include his wife, Cyndy of Normal; a son, Doug (Corey)
Diederich of Naperville; a daughter, Mary (Fiancé Emil Tadros)
Diederich of  Normal. Also surviving are several nieces and
nephews.

He was preceded in death by his parents, a brother, Ronald
Diederich and a sister, Linda Bulmahn.

During the Korean War Phil proudly served his country in the
U.S. Army.

He was employed as an accountant for Builders Supply in
Bloomington from 1974-1981, he then went to work for Stark
Excavating until his retirement in 2004.

Phil was a member of Trinity Lutheran Church in Bloomington, and
also the American Legion Post in both Ft. Wayne and
Bloomington.  Phil was also a member of Illinois State
University Red Bird Club and enjoyed golfing with the Prune Juice
Golf League.

He was a huge Indiana Hoosier fan, enjoyed watching sports and
playing golf.  Phil also enjoyed traveling and spending time
with his family. After his retirement Phil also volunteered with
Habitat for Humanity doing their bookkeeping for them and also
volunteered at the BroMenn Thrift Shop.

Phil demonstrated so many qualities in his role as husband,
father, uncle, brother and friend.  Phil's actions were louder
than his words.   He embodied unwavering love for his
family, tolerance for others, with a quiet dignified strength and
steadfast integrity. We will all miss him.

Online condolences may be sent to the family at
kiblerbradyruestman.com.

To send flowers to the family or plant a tree in memory of Philip A. "Phil" Diederich, please visit our floral store.

To send flowers to the family in memory of Philip Diederich, please visit our flower store.