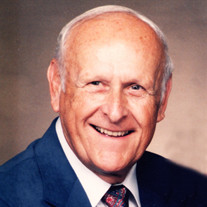 Roanoke - Raymond John Zimmerman, 96, formerly of Pekin, IL passed away at 8:45 pm on Thursday October 12, 2017 at the Apostolic Christian Home of Roanoke.

He was preceded in death by his parents, four sisters, and 6 brothers.

A Navy veteran, Raymond served his country during WWII.

He was a member of the Roanoke United Methodist Church where he had served in various roles for the congregation.

Funeral services will be held at 11am on Saturday October 21st at Knapp-Johnson-Harris Funeral Home in Roanoke.  Pastor Charlie Graul will officiate.  Visitation will be held from 10-11 am prior to the services at the funeral home.  Burial will be in Roanoke Township Cemetery.

In lieu of flowers, memorial contributions may be made to the Apostolic Christian Home of Roanoke or to the Roanoke United Methodist Church. Online condolences may be sent to the family at knappjohnsonharris.com.


To send flowers to the family or plant a tree in memory of Raymond John Zimmerman, please visit our floral store.

To send flowers to the family in memory of Raymond Zimmerman, please visit our flower store.