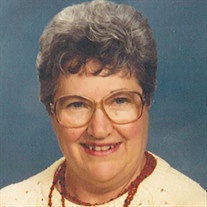 Roanoke-Reta Heinzelman Riley, 89, of Roanoke passed away at 2:19 am on Wednesday, May 17, 2017 at the Roanoke Apostolic Christian Home where she had been a resident for the past three years.

She was born on February 7, 1928 in the town of Atwood in Piatt County Illinois a daughter of Victor and Caddie Fischer Heinzelman. She married Wilmer W. Riley on May 4, 1958 in Decatur, IL. He preceded her in death on December 31, 2004.

She taught for 2 years at Washington High School before beginning what was to be a 31 year tenure at Roanoke-Benson District 60, and where from 1953 to 1984 she taught physical education and social studies. She was often a class sponsor along with sponsoring cheerleading, GAA, student council, and she greatly enjoyed helping plan many school parties. For several years she took her social problems classes on memorable field trips to the Pontiac Prison. Reta accompanied eight classes on their senior trips and enjoyed telling stories about their escapades. She owned a complete collection of Roanoke-Benson High School yearbooks dating from 1954 to the present and was able to name the graduation year of nearly everyone who graduated from RB during the years she taught there. Reta loved living in Roanoke.

Reta and Wilmer enjoyed traveling the United States in the summers and later spent many happy retirement years together. She loved being a part of the Riley clan. A great joy to both Reta and Wilmer was being an aunt and uncle to two extended families of nieces and nephews.

She was preceded in death by her parents, two brothers Victor "Bud" and Paul Arthur, four sisters, Agnes; Florence; Madge; Martha; nephews Victor and Kenny; and one niece Carol Ann.

She was a long time member of Delta Kappa Gamma and former president of Alpha Beta Chapter. She belonged to the Woodford County and the Illinois Retired Teachers, the IEA, and the Millikin University Alumni Association. She had served as a volunteer for the American Red Cross Bloodmobile and the United Way. She had been a member of the Woodford County Home Extension since 1983.

Reta always stayed connected to her family and friends "down home" in Atwood. She took special pleasure in arranging and attending her Atwood High School class reunions, attending her last reunion in September, 2016.

During her college years she belonged to the First Baptist Church in Decatur and was very active in its youth group. Reta never forgot the four happy summers she spent in Colorado as a cook in a youth camp. While in the west Reta developed a life-long interest in Native Americans. She also had a very special fondness for animals.

Funeral services will be held at 11:00 am on Saturday, May 20, 2017 at her church. Pastor Charlie Graul will officiate. Visitation will be held at the church from 9:30-11 am before the service. Burial will be in Roanoke Township Cemetery. Knapp-Johnson-Harris Funeral Home in Roanoke is assisting the family with arrangements.

Memorials may be made to the Roanoke United Methodist Church or the Roanoke Apostolic Christian Home. Online condolences may be sent to knappjohnsonharris.com.

A big thank you goes to the loving and devoted staff at the Roanoke Apostolic Christian Home, to the Unity Point Hospice nurses, the nurses and staff at Advocate BroMenn Hospital, and the staff at the Fresenius Hemodialysis Center for the top quality care given to Reta; and to Dr. Chris Hughes for his expert medical care and his kindness.


To send flowers to the family or plant a tree in memory of Reta Heinzelman Riley, please visit our floral store.

To send flowers to the family in memory of Reta Riley, please visit our flower store.