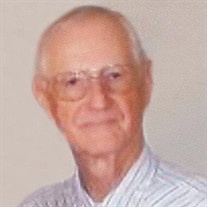 Richard G. "Coach" Broers, 92 of Roanoke, passed away on May 26, 2020. He was born April 8, 1928 in Cazenovia, Illinois to Ernest and Ferne Able Broers. He was preceded in death by his brothers Milford, Jerry, and Deryl.

Richard married Lucille Rider on December 27, 1948 in Washington, IL. She survives. Also surviving is his son, Stan (Joni Riggs) of Houston, TX, and his daughters, Marty (Mitch) Koch and Marilyn Koch, both in Roanoke, as well as seven grandchildren and six great grandchildren.

He was a loving family man and enjoyed sports, especially The St. Louis Cardinals. He was known to always have a joke or two available at the right moment.

He competed in baseball and basketball at Metamora High School and graduated from Eureka College to become their first basketball player to score 1,000 points during his career. He began teaching and coaching at Lowpoint before it merged with Washburn, spending two years there. He started his career at Roanoke in 1952, four years before the consolidation with Benson.

He retired from coaching in 1974 with 401 victories and 167 defeats. He was inducted into the Eureka College basketball Hall of Fame as well as The Illinois Basketball Coaches Association Hall of Fame.

He worked for Jim Maloof Realtor in Germantown after coaching and spent 12 years as a manager at the Roanoke Savings and Loan. He finished his working career at Charles River Laboratories or SPAFAS Inc.

A celebration of life will be planned at a later date. In lieu of flowers, memorial donations may be made to the Roanoke-Benson High School Athletic Department. (208 W. High St., Roanoke, Ill. 61561). Online condolences and tributes may be sent to the family at knappjohnsonharris.com.

To send flowers to the family or plant a tree in memory of Richard G. "Coach" Broers, please visit our floral store.

To send flowers to the family in memory of Richard Broers, please visit our flower store.