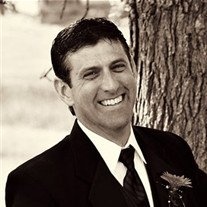 Roanoke-Richard Knepp, 53, of Roanoke, IL passed away at his
residence with family by his side at 9:50 am on Thursday November
1, 2012.

Rich was an electrician by trade, working at Oberlander Electric
for 34 years.

Rich was a member of the Roanoke Apostolic Christian Church
where funeral services will be held at 1pm on Sunday November 4,
2012. Church ministers will officiate. Visitation will be from 3-7
pm on Saturday at the Knapp-Johnson-Harris Funeral Home in Roanoke
and from 12:00-12:45 on Sunday at the church. Burial will be in the
church cemetery.

Memorial contributions may be made to the Children's Hospital of
Illinois at OSF St. Francis Medical Center. Online condolences may
be sent to the family at knappjohnsonharris.com.

To send flowers to the family or plant a tree in memory of Richard Knepp, please visit our floral store.

To send flowers to the family in memory of Richard Knepp, please visit our flower store.