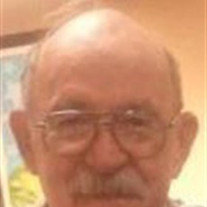 Dick worked as a custodian for Midland High School and as an
agent for Standard Oil in the Lacon, Washburn, and Henry area, from
where he retired.  He was in the U.S. Army and served in
Germany from 1957 to 1960.  He was a member of the Lacon
Rotary Club, the L-S Volunteer Fire Department, and a former member
of the Billie Roth AM Vets Post.

Dick was a long-time pilot and an avid trapshooter, and in his
younger days he raced motorcycles.  He enjoyed playing cards
with his family and friends.  He was a loving father,
grandfather, and friend who will be dearly missed by all who loved
him, including his two cats, Eugene and Whitey.

Services will be at 1:00 p.m. on Monday October 1, 2012 at Lenz
Memorial Home, with a visitation one hour prior.  Entombment
will follow the service at the Lacon Cemetery Mausoleum,
where military rites will be accorded.  Memorials may be made
to the Lacon-Sparland Fire Department or to Just Animals in
Princeton.  Online condolences may be expressed at
www.lenzmemorialhome.

To send flowers to the family or plant a tree in memory of Richard "Dick" Randall, please visit our floral store.

To send flowers to the family in memory of Richard Randall, please visit our flower store.