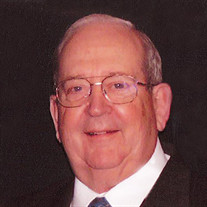 He was born on August 16, 1935 in rural Woodford County, IL to Theodore and Amy Rocke Stoller. He married Barbara "Babs" Moser on April 28, 1957 in Roanoke. She survives.

He was preceded in death by his parents and one brother, Russell Stoller.

Rich graduated from Eureka High School and then was a machinist having worked for Ulrich Manufacturing in Roanoke, McBride and Shoff in Metamora, and retiring from Caterpillar in Pontiac in 1998. He also farmed part time in the Roanoke area.

He was a member of the Roanoke Apostolic Christian Church where he had served as a Sunday School teacher and a trustee. Rich enjoyed fishing, hunting and flying.

Funeral services will be held on Sunday July 15, at 1:00 pm at the Roanoke Apostolic Christian Church. Church ministers will officiate. Visitation will be held from 4-7 pm on Saturday at Knapp-Johnson-Harris Funeral Home in Roanoke and from 12-12:45 Sunday at the church. Burial will be in the church cemetery.


To send flowers to the family or plant a tree in memory of Richard L Stoller, please visit our floral store.

Please click here to view the video tribute
To send flowers to the family in memory of Richard Stoller, please visit our flower store.