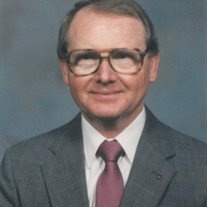 His funeral will be at 6 p.m. on
Friday, August 9, 2013 at Kibler-Brady-Ruestman Memorial Home in
Bloomington with Pastor Scott Carnes officiating.  Burial will
be  at 11 a.m. on Saturday, August 10, 2013 in Elmwood
Cemetery in Greenview.  Visitation will be from 5-6 p.m. on
Friday prior to the funeral service at the memorial home.
Memorial gifts may be made to the First United Methodist Church in
Normal; Community Cancer Center in Normal or Heritage Health in
Normal.  Kibler-Brady-Ruestman Memorial Home is assisting the
family with arrangements.

Bob attended Illinois State Normal
University and received his bachelor's degree in 1941 and his
master's degree in 1952.  He was a high school teacher for 17
years and taught aeronautics, math, chemistry and physics at
Danvers and Vandalia High Schools.  For twenty years, Bob
taught chemistry and physics at Illinois State University and
developed elementary school science programs, retiring in
1978.

He was a member of the First United
Methodist Church and was active in numerous math , science and
educational organizations, including Kappa Mu Epsilon, Kappa Phi
Kappa, National Science Teachers Association and American
Association of Physics Teachers.  Bob served as president of
the Lions Club and the Phi Delta Kappa Professional Education
Fraternity at ISU.

Bob enjoyed meeting friends for
coffee at Target and Eastland Mall, bird watching on his patio and
making his famous chicken for family cookouts.  He loved his
family and was proud of each of them.

The family would like to thank Dr.
Pramern Sriratana and the staffs at the Community Cancer Center and
Heritage Health for their excellent care.

Bob was a loving husband, father,
grandfather, brother and uncle and will be greatly missed.

To send flowers to the family or plant a tree in memory of Robert "Bob" Lee Cramer, please visit our floral store.

To send flowers to the family in memory of Robert Cramer, please visit our flower store.