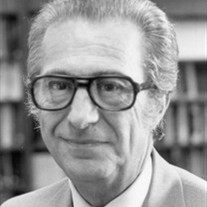 Bloomington-Robert W. Harrington,
89, passed away on Friday, November 2, 2012 at OSF ST. Joseph
Medical Center in Bloomington at 5:53 pm.  Graveside services
will be held on Wednesday, November 7, 2012 at 1:30 pm at Lyndon
Township Cemetery in Lyndon, IL with Rev. Wes Dickson officiating.
Full Military Honors will be provided by the
Prophetstown-Lyndon American Legion Post 522. Kibler-Brady-Ruestman
Memorial Home in Bloomington is handling arrangements.

He was born in rural Whiteside
County, Illinois on May 21, 1923, son of Loyd and Anna (Mundt)
Harrington. Survivors include two sisters, Pauline Wallick,
Lafayette Indiana and Betty Ann Solton, Dubuque, Iowa and four
nephews and one niece. He was preceded in death by his parents and
brother, Gene.

Professor Harrington progressed
from Lyndon High School graduate to PhD in five academic years and
as many summer sessions. Those were included in ten calendar years
(1941-1951) which also included military service and full-time
teaching.

He received a bachelor's degree in
business education from Illinois State Normal University in 1947, a
master's degree in marketing (1948) and a doctor of philosophy
degree in international economics (awarded in January 1952) both
from the University of Iowa. He also studied at Cambridge
University and the Universities of Wisconsin and Alaska. He was a
member of several honorary and professional Societies including Pi
Omega Pi, Phi Gamma Nu, Alpha Kappa Psi, Omicron Delta Gamma and
Phi Kappa Phi.

Dr. Harrington, who joined the
Illinois Wesleyan faculty in 1968, retired after forty years of
college level teaching in 1989 and was named Professor Emeritus at
Illinois Wesleyan University.. For the last 21 of those years he
was Professor and Director of the Division of Business and
Economics at Illinois Wesleyan University. At the time of his
retirement he was the Robert S. Eckley Distinguished Professor of
Economics. Previously he taught at Central College, Pella, Iowa
(1948-1950), Wisconsin State College, Superior (1951-1956) and
Indiana State University, Terra Haute (1956-1968). He served in the
U.S. Naval Reserve (1943-1946).

Dr. Harrington served as a United
Way volunteer in a wide range of capacities for some 20 years and
was president of its Board of Directors from 1983-1984; and was
"Volunteer of the Year" in 1987.

Travels included an eight month,
self-planned trip around the world.

In lieu of flowers, memorials may
be made to Illinois Wesleyan University or the Lyndon Illinois
Historical Society.

To send flowers to the family or plant a tree in memory of Robert W. Harrington, please visit our floral store.

To send flowers to the family in memory of Robert Harrington, please visit our flower store.