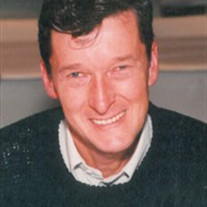 Bloomington, IL-Robert Paul
Hill, 77,of Bloomington, passed away at 11:35 a.m. on Saturday
(February 02, 2013) at OSF St. Joseph Medical Center. His funeral
will be at 1:00 p.m. on Friday (February 08, 2013) at
Kibler-Brady-Ruestman Memorial Home with Pastor Ron Woodrum
officiating. Visitation will be 11:00 a.m. until time of service at
the funeral home. Burial will be in Hopewell Cemetery in Downs, IL.
Memorials may be made to Central Illinois Memorial Kidney Fund or
Community Cancer Center Foundation or Eastview Christian
Church.

Robert was born January 27, 1936 in
Bloomington, the son of Cecil and Mildred (Warner) Hill

He married Martha Elizabeth
(Robinson) Hill in 1962 in Lincolnton, North Carolina. She preceded
him in death on September 27, 1987.

In addition to his parents and
wife, Robert was preceded in death by his son, James Ernest
Hill.

Robert grew up in Bloomington and
attended Illinois Wesleyan University where he received his
Bachelor's Degree and later joined Eastview Christian Church. He
worked in the insurance industry and retired from Capen Frank
Proctor & Bowles. He was a long time member in the Young Men's
Club, Koda Roamers Camera Club, and the Illinois Valley Striders.
Robert was a long-distance runner, competing in countless 5K and
10K races and marathons in Boston, Saint Louis, and Fort Worth. He
was a loving father and will be sorely missed by his family.

Online condolences may be sent to
the family at kiblerbradyruestman.com

To send flowers to the family or plant a tree in memory of Robert Paul Hill, please visit our floral store.

To send flowers to the family in memory of Robert Hill, please visit our flower store.