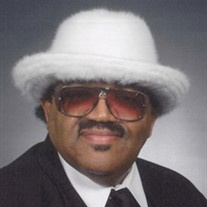 Bob was born on August 21, 1941 in Alton, Il to the union of
William and Lessie (Miller) Thompson. He married Bonita J. Crumbley
on September 25, 1993 in Bloomington, she survives.

A host of 21 grandchildren and 11 great-grandchildren survive
along with Aunt Mary Brown, Uncle Sims and a host of aunts,
cousins, nephews and nieces.

He was preceded in death by his parents, and his and Bonita's
two infant children, Cassia and Robert LeRoy Hopkins Jr. and
several of his grandchildren.

Bob graduated from Alton High School. He was employed at Eureka
Williams Factory and General Grocer Company for several years. He
worked for BroMenn Adult Day Care for 22 years retiring in 2008.
After his
retirement Bob worked for Mayors Manor for 4 years. He also owned
and operated House of Sounds Record Store in Bloomington for 9
years.

Bob proudly served his country in the US Army from 1958-1964 and
was stationed in Vietnam, Korea, Greenland, Okinawa, West Virginia,
and Fort Leonard Wood, Missouri.

He was a member of Crossroads Chapel in Bloomington where he
served the church and loved to sing.

Bob was an avid sports fan especially football and basketball.
He enjoyed history, politics and also reading. He loved watching
old black and white movies along with his hats, clothes, big
automobiles, and good food. His favorite holidays were Thanksgiving
and Christmas.

Bob's passion was music; he loved singing Gospel Music and the
Blues. He was a professional singer in the 1950's and founded a
band called the Du-Tones and had a well known song "Shake a Tail
Feather". After
this he sang at various churches and at Crossroads Chapel. Bob
also sang in the US Military with various R&B
Groups.

He was deeply loved by his family and will be sadly missed.

In lieu of flowers, memorial contributions may be made to the
family or to Crossroads Chapel in Bob's name.

Online condolences may be sent to the family at
kiblerbradyruestman.com.

To send flowers to the family or plant a tree in memory of Robert "Bob" Leroy Hopkins, please visit our floral store.

To send flowers to the family in memory of Robert Hopkins, please visit our flower store.