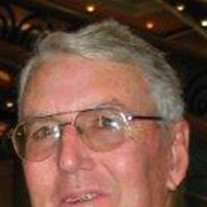 
He was born on December 11, 1936 in Peoria, IL, son of Loran and
Frances Denman Cornwell. He married Sandra Elaine Kopp on February
5, 1961 at the Illini Congregational Church in Macon County,
IL. She passed away on April 22, 2009. He was also preceded in
death by his parents.

Rod graduated from Deer Creek-Mackinaw High School in 1955 and
served in the Air National Guard. He was a life-long farmer who
farmed over 40 years with his brother Bruce and then continued to
farm the remaining 10 years with his son Craig. Farming was his way
of life and family was a priority. He also had a great love of
people and conversation. It was his faith in God that was the
foundation of his life.


He was a member of the Deer Creek Baptist Church where he served
many years as a deacon. He was also on the Mt. Zion Cemetery Board
where his father and son have also served.

Visitation will be held on Monday, May 13, 2013 from 4-7 pm at
the Argo-Ruestman-Harris Funeral Home in Eureka. Funeral services
will be held at 10:00 am on Tuesday, May 14, 2013 at the Deer Creek
Baptist Church. Pastors Henry Miller and Paul Maitland will
officiate. Burial will be in Mt. Zion Cemetery in rural Deer
Creek.

The family would like to give special thanks to the Eureka
Apostolic Christian Home staff and Methodist Hospice on shepherding
his final earthly days until his entrance into his Father's
kingdom.

Memorial contributions may be made to the Deer Creek Baptist
Church or Mt. Zion Cemetery in rural Deer Creek, IL. Online
condolences may be sent to the family at
www.ruestmanharrisfuneralhome.com

To send flowers to the family or plant a tree in memory of Rodney Alan Cornwell, please visit our floral store.

To send flowers to the family in memory of Rodney Cornwell, please visit our flower store.