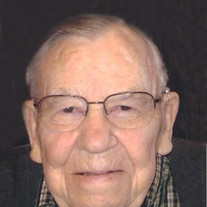 Benson- Rodney V. Thompson, 90, of Benson, IL, went home to be
with his Lord and Savior Jesus Christ,  on Friday, March 8,
2013 at the Apostolic Christian Home of Roanoke.

He was preceded in death by his parents and one brother, James
Thompson Sr.

An Army Veteran, Rodney served his country in the Army Air Corp
during WWII.  He was stationed in Pearl Harbor at Wheeler
Field in Oahu when the Japanese attacked.  During the war he
served as Sgt. in the 431st Fighter Squadron in the
Asiatic Pacific Theater.  He served from October 28, 1940 to
October 26, 1944, ending his service in New Guinea.   He
was a member of the Benson American Legion Post #454 and the
Disabled American Veterans.

Rodney worked for the Farmer's State Bank in Benson for 25
years.

He was a member of the Benson Baptist Church where funeral
services will be held at 10:00 am on Tuesday March 12, 2013.
Pastor Brian Trennepohl will officiate.  Visitation will be
held from 5-7 pm on Monday March 11, 2013 at Knapp-Johnson-Harris
Funeral Home in Roanoke.  Burial with military rites will be
in Clayton Township Cemetery.

Memorial contributions may be made to Benson Baptist Church, the
Apostolic Christian Home of Roanoke, or to the Benson Ambulance
Service. Online condolences may be sent to the family at
knappjohnsonharris.com.

To send flowers to the family or plant a tree in memory of Rodney Thompson, please visit our floral store.

To send flowers to the family in memory of Rodney Thompson, please visit our flower store.