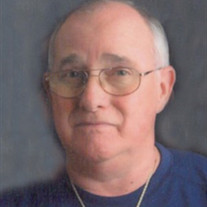 He was preceded in death by his
parents, and uncle Joe Fitchorn.

Roger was a life long member of
Trinity Lutheran Church where he enjoyed giving out suckers to all
the small children who came through the door.

He was employed as a dock man with
Nussbaum Trucking Company for 25 years.  He was an avid
sportsman and HAM radio operator, his call letters were KC9
PIQ.  He was a member of the HAM Radio Club and had numerous
friends.

Roger was a veteran serving in
the United States Air Force.

His funeral service will be held at
11:00 a.m. on Friday, December 27, 2013 at Trinity Lutheran Church
in Bloomington with Pastor Thomas Wirsing and Pastor Chris Nitzel
officiating.  Visitation will be held from 5-7p.m. on
Thursday, December 26, 2013 at Kibler-Brady-Ruestman Memorial Home
in Bloomington and one hour prior to the service on Friday at the
church.  Full Military Rites will be accorded by the
Bloomington-Normal American Legion Honor Guard.

Interment will be held at East Lawn
Memorial Gardens in Bloomington.  In lieu of flowers,
memorials may be made to Trinity Lutheran Church in
Bloomington.  Kibler-Brady-Ruestman Memorial Home in
Bloomington is assisting the family with arrangements.

He will be missed by all who knew
him, "Ta-Ta Grumpy".

Online condolences and memories of
Roger may be sent to the family at kiblerbradyruestman.com.

To send flowers to the family or plant a tree in memory of Roger C. Fitchorn, please visit our floral store.

To send flowers to the family in memory of Roger Fitchorn, please visit our flower store.