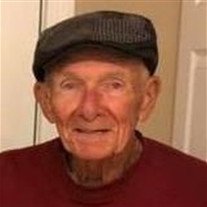 Roger Clark Herbst, 82 of Roanoke passed away on November 12, 2019 at Advocate BroMenn Medical Center in Normal. He was born on March 8, 1937 in Roanoke the son of Ernest "Nick" Lewis and Mable I. (Knoblauch) Herbst. He married Sandra Hoffman on September 18, 1965. She survives. He later married Linda Hinthorne on July 31, 1999 in Roanoke.
Roger was preceded in death by his parents; 2 brothers and 1 grandson: Nick.
He is survived by his wife: Linda Herbst of Roanoke; 3 children: Michelle Diane Herbst; Christine Marie (Nathan) Fehr; Michael Andrew (Rebecca) Herbst all of Roanoke; 1 step-daughter: Stephanie (Mark) Leman of Bloomington; grandchildren: Amanda, Josh, Sam, Devin, Ian; step-grandchildren: Damon, Alora, Zack; great-grandchildren: Sydney, Toren; and 1 step-great-grandchild: Riley.
Roger was the owner operator of IH First Insurance in Roanoke for 30 plus years. He was an avid golfer and member of several golfing clubs including: Roanoke Golf League, Tall Oaks and Washburn. He was a member of the Roanoke Businessmen's Club. Roger was an avid fan of the Chicago Cubs and Bears.
A visitation will be held on Sunday, November 17, 2019 from 4 to 6pm at Knapp-Johnson-Harris Funeral Home in Roanoke. Funeral service will be held on Monday November 18, 2019 at the Roanoke Apostolic Christian Church at 10am with a visitation one hour prior. Church ministers will officiate the service.
Online tributes and condolences may be made at knappjohnsonharris.com. Memorial contributions may be directed to the Juvenile Diabetes Association.


To send flowers to the family or plant a tree in memory of Roger Clark Herbst, please visit our floral store.

Please click here to view the video tribute
To send flowers to the family in memory of Roger Herbst, please visit our flower store.