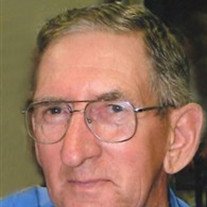 
Benson- Roger W. Kapraun, 84, of rural Benson, passed away at 3:49
pm on Sunday January 5, 2014 surrounded by his family at OSF St.
Francis Medical Center in Peoria.


He was born on November 9, 1929 in Streator, IL to John S. and
Christina Meyers Kapraun. He married Phyllis Carls on April 24,
1954 in Benson. She survives.


He was preceded in death by his parents, one daughter, Patricia;
and one sister Rosanna Kapraun.


An Army veteran, Roger served his country during the Korean War.
He was a member of the Korean War Cheju-do veterans and attended
all of their reunions for the last 28 years. He was also a member
of the Benson American Legion Post # 454.


Roger was a lifelong Benson resident and farmer. He founded
Kapraun Welding in Benson in 1955 and worked there until he retired
in 1991.


He was a lifelong member of the St. John's Catholic Church in
Benson, where he had actively served in many roles through out the
years.


Funeral Mass will be held at 10:00 am on Friday January
10th at St. John's Catholic Church in Benson. Monsignor
Charles Beebe will officiate. Visitation will be held from 4-7 pm
on Thursday also at the church in Benson. A rosary service will be
held at 7pm Thursday night following the visitation at the church.
Burial with military rites will follow the service at St. John's
Catholic Cemetery in Benson. Ruestman-Harris Funeral Home in Minonk
is in charge of arrangements.


In lieu of flowers, memorial contributions may be made to St. Jude
Midwest Affiliate or to the St. John's Catholic Church building
fund. Online condolences may be sent to the family at
www.ruestmanharrisfuneralhome.com.

To send flowers to the family or plant a tree in memory of Roger W. Kapraun, please visit our floral store.

To send flowers to the family in memory of Roger Kapraun, please visit our flower store.