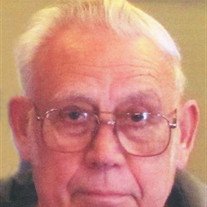 He was preceded in death by his
parents, one brother, George; and one granddaughter Carolyn.

Ronald started his career at
Caterpillar in East Peoria as a skilled trade plumber. He worked
for 35 years there before retiring in 1986 as the Superintendent of
Construction.

An Army veteran, he served his
country during the Korean War. He was a member of the American
Legion in both Roanoke and Washington.

Ronald was a life long Cubs fan.
Family and friends always came first for him. He was kind and
generous and had a heart of gold. He was always willing to help
others out and will be greatly missed.

Funeral services will be held at
10:00 am on Friday, September 21, 2012 at the Knapp-Johnson-Harris
Funeral Home in Roanoke. Rev. Tom Zobrist will officiate.
Visitation will be held from 5-7 on Thursday evening at the funeral
home. Per his wishes, cremation rites will be accorded and burial
of ashes will be in Minonk Township Cemetery.

Memorial contributions may be made
to the Alzheimer's Association of Central Illinois at 606 West Glen
Avenue Peoria, IL 61614. Online condolences may be sent to the
family at knappjohnsonharris.com.

To send flowers to the family or plant a tree in memory of Ronald D. Girardi, please visit our floral store.

To send flowers to the family in memory of Ronald Girardi, please visit our flower store.