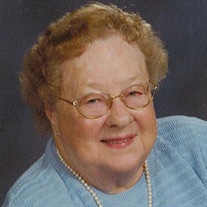 Roanoke-Ruth M. Martin, 95, of Roanoke passed away at 2:05 am on Sunday, August 13, 2017 at the Roanoke Apostolic Christian Home where she was a resident.

She was preceded in death by her parents, step mother, Ellen Siebenthal; infant sister, Erma Elaine; sister Pearl Martin; son-in-law Carl McGhee; grandson Corey McGhee; and her special aunt Lena Eberle. Ruth's mother passed away when she was four years and her mother's twin, Lena, helped her father care for the family for 30 years.

Ruth was a homemaker who loved to cook and entertain for her many friends and family. She founded "The Happy Homemakers" 4-H club for her 5 daughters along with her helper, Cynthia Aeschleman. She belonged to the Woodford County Home Extension for 35 years and was a member of the Roanoke United Methodist Church.

Ruth loved her family dearly and will be missed by all who knew her. Her family would like to extend a special thank you to the Roanoke AC Home for the kind and loving care of their mother and grandmother for the 3 years she resided there.

Funeral services will be held at 10:00 am on Thursday, August 17, 2017 at the Knapp-Johnson-Harris Funeral Home in Roanoke. Frank Sauder will officiate. Visitation will be held on Wednesday evening from 4-7 pm also at the funeral home. Burial will be in the Roanoke Apostolic Christian Cemetery.

In lieu of flowers, memorial may be directed to the Roanoke Apostolic Christian Home. Online condolences may be sent to the family at www.knappjohnsonharris.com.


To send flowers to the family or plant a tree in memory of Ruth M. Martin, please visit our floral store.

To send flowers to the family in memory of Ruth Martin, please visit our flower store.