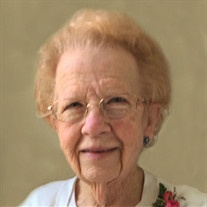 Benson- Ruth Ellen Thompson, 92, of Benson, IL, beloved mother, grandmother, great grandmother, sister, and aunt, went home to be with her Lord and Savior at 11:45 pm on Monday evening October 22, 2018.

She was preceded in death by her parents, an infant brother, Reuben, and one brother, James Ford.

Ruth attended grade school in a one room country school in Linn Township. She graduated from Benson High School in 1943 and attended for a semester at Bob Jones College in Cleveland, TN. She then worked for ABC Washing Machine Co. during WWII which made artillery shells assisting the war effort. She later worked for Toluca Garment Factory.

Faith and family always came first for Ruth. She gave testimony of her faith in her Savior the Lord Jesus Christ both by her care for others and her daily words and actions.

Funeral services will be held at 10 am on Saturday, October 27, 2018 at Knapp-Johnson-Harris Funeral Home in Roanoke. Brian Trennepohl will officiate. Visitation will be from 5-7 pm on Friday at the funeral home. Burial will be in Clayton Township Cemetery in Benson.

The family would like to express their thanks and appreciation to the employees at the Apostolic Christian Home for the tender love and care that Ruth received while a resident at the home.

Memorial contributions may be made to the Benson Baptist Church, the Apostolic Christian Home of Roanoke, or the Benson Ambulance. Online condolences may be sent the family at knappjohnsonharris.com.


To send flowers to the family or plant a tree in memory of Ruth Ellen Thompson, please visit our floral store.

Please click here to view the video tribute
To send flowers to the family in memory of Ruth Thompson, please visit our flower store.