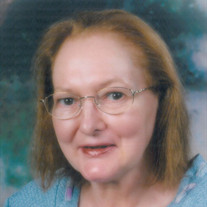 Bloomington-Sandra Louise Sherman,
73, of Bloomington passed away on Sunday, February 16, 2014 at 3:40
am in Bloomington at Asta Care Center.

Funeral service will be held on
Thursday, February 20, 2014 at 10 a.m. at Kibler-Brady-Ruestman
Memorial Home in Bloomington with Rev. Adam M. Davis officiating.
Visitation will be held on Thursday from 9 a.m. until the time of
the service at the memorial home.

Interment will be at Evergreen
Memorial Cemetery in Bloomington. In lieu of flowers, memorials may
be made to CISAR Animal Shelter in Sandra's name. The family has
entrusted Kibler-Brady-Ruestman Memorial Home in Bloomington to
handle arrangements.

Sandra was born on February 22,
1940 in Muscatine, Iowa a daughter to Harlan and Beatrice (Walker)
Johnston. She attended Muscatine High School and graduated in 1958.
Sandra married Marvin Lee Sherman on June 1, 1959; he passed away
on December 14, 1994. She later married Laverne Wiese, Jr. on
September 22, 1981 in Clinton, Iowa.

Sandra was preceded in death by her
parents, husband, Marvin Sherman, a son, David Sherman, and her
sister, Nancy Snyder.

She was most recently a resident at
Asta Care Center prior to this she made her home with her daughter
Linda and son-in-law Philip Luecke in Bloomington.

Sandra had worked as a nurse in her
earlier years. She enjoyed singing in the church choir and doing
many different crafts. One of her greatest joys was taking care of
animals.

Most of all she loved her family
and the family pets.

Online condolences and memories of
Sandra may be sent to the family at kiblerbradyruestman.com.

To send flowers to the family or plant a tree in memory of Sandra L. Sherman, please visit our floral store.

To send flowers to the family in memory of Sandra Sherman, please visit our flower store.