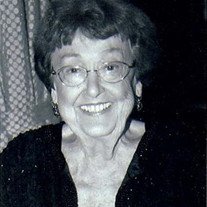 Upon the death of their mother in 1936, Sally and her sister,
Grace, moved to Sparland where the live with their aunt and uncle,
Sara and Ralph Christman.  Sally graduated from Sparland High
School and received her Bachelor of Arts degree in Art and
Education from MacMurry College in Jaacksonville, IL.

Upon her marriage to John R. Griffin on August 15, 1954, she and
John moved to New Mexico where he obtained his Master's Degree in
Education.  During her career as an elementary school teacher,
Sally taught at the Mescalero Apache Reservation School at Ft.
Defiance, AZ.  In 1975, she and John moved to Bullhead City,
AZ where she taught second grade and he was the principal at Mohave
High School.  She retired from teaching in 1992.

Also preceding her indeath were her brothers, William C. Marland
and James Robert Marland; and her sister, Grace Marland Beck.

Cremation rites have been accorded.  Inurnment of ashes
will be at Bell Plain Cemetery in Pattonsburg.  Memorials may
be made in Sally's name to St. Joseph's Nursing home in Lacon.

To send flowers to the family or plant a tree in memory of Sara "Sally" Griffin, please visit our floral store.

To send flowers to the family in memory of Sara Griffin, please visit our flower store.