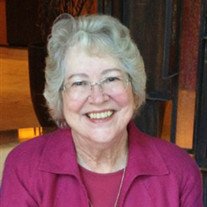 Sharon Anne Smith Pfister passed away at 8:08 pm on Monday,
April 7, 2014 at Advocate BroMenn Medical Center.  She was
born Dec. 28, 1938 in Bloomington, IL a daughter of Edward R. Smith
and Veronica Hayes Smith. Sharon married Jerome "Jerry" Pfister at
Holy Trinity Church in Bloomington on Dec. 29, 1962. They lived in
El Paso all of their married life and spent winters in Southern
Florida beginning in 2009. He survives.

She attended Holy Trinity Grade and High Schools, graduating in
1956. She received a B.S. in Education from ISNU, and taught
Pre-School for deaf children in Champaign.


She was a member of St. Mary's Church in El Paso where she served
on various committees at the church and at her children's schools,
joking that she was a "Room Mother" for 27 years, possibly a world
record! She served on the El Paso School Board for 8 years, as it's
secretary for 6 years, and on the Mackinaw Valley Special Education
Council. She was a board member of Homes of Hope and founder of the
St. Therese Foundation.


She was a devoted wife, mother, grandmother and a dear friend to
many who will be greatly missed.

Funeral mass will be held at 10:00 am on Saturday, April 12,
2014 at St. Mary's Catholic Church in El Paso. Fr. Dan Wilder will
officiate.  Visitation will be held on Friday evening from 4-7
pm with a rosary recital at 3:30 pm at the Ruestman-Harris Funeral
Home in El Paso.  Burial will be in St. Joseph Catholic
Cemetery.

Memorial contributions may be directed to Homes of Hope in
Normal, IL or St. Mary's Catholic Church in El Paso, IL. Online
condolences may be sent to ruestmanharrisfuneralhome.com.

To send flowers to the family or plant a tree in memory of Sharon Pfister, please visit our floral store.

To send flowers to the family in memory of Sharon Pfister, please visit our flower store.