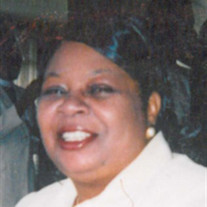 Bloomington - Shirley Ann
Harris, 54 of Bloomington went to be with the Lord on February 28,
2014 at home at her request on Hospice, with her family and Deacon
Nate Alexander by her side. Shirley was at peace and was saved with
the Spirit of the Holy Ghost at the time of her demise.

Her funeral service will be held on
Friday, March 14, 2014 at Mt. Pisgah Baptist Church in Bloomington
at noon with Rev. Frank L. McSwain, Sr. officiating. Visitation
will be held from 10:00 am up until the time of the service at the
church on Friday.

Interment will be in Evergreen
Memorial Cemetery in Bloomington. In lieu of flowers, memorial
contributions may be made to the American Diabetes Association or
to the American Cancer Society in Shirley's name. The family of
Shirley has entrusted the care of their loved one to
Kibler-Brady-Ruestman Memorial Home in Bloomington.

Shirley Ann Harris was born on
September 25, 1959 in Chicago, IL a daughter to James Fields
Brinton  and Climmie Mae Harris.

In addition to her husband
Mitchell, Shirley was preceded in death by her parents, two
sisters, one brother, and one nephew.

Shirley was known for her beautiful
smile and her passion of being a "glamour girl", always dressed in
fashion from head to toe. She was loved and respected by all that
she greeted. Shirley accepted Christ at an early age and was a
baptized member of the Old Way Missionary Baptist Church in
Chicago, IL.

She attended the Chicago Public
schools, Bond Elementary, and Parker High Schools, where she
received her general education studies. Shirley went on in life to
pursue a career in Certified Nursing where she worked in the field
over thirty years.

Shirley met and married Mitchell
Thomas in 1996, he preceded her in death. Shirley's spirit led her
to move to Bloomington in 1997 where she became a very active
member of the Mt. Pisgah Baptist Church under the leadership of
Rev. Frank L. McSwain, Sr. and was known admiringly as
"Sanctuary".

To send flowers to the family or plant a tree in memory of Shirley Ann Harris, please visit our floral store.

To send flowers to the family in memory of Shirley Harris, please visit our flower store.