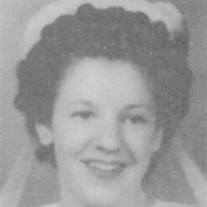 She was preceded in death by her
parents, daughter Madonna, and sister Dorothy and a brother
Ray.

She worked as a switchboard
operator for the phone company while attending Gallagher Business
School. Later Shirley graduated from Beautician School. Shirley was
hired by the Federal government, with positions in Social Security,
Federal Crop Insurance, and I.R.S for over a 35 year period before
retiring. During this time she worked part time with her husband
with Jewel Shopping Service, and set up a home beauty shop called,
"Shirl's Cuts and Curls," where she would cut hair for her many
friends and relatives, her two famous hairstyles being the "cut de
coup" and "the Shirley perm."

Shirley liked to read, keep up on
current events, and research family history. She was not afraid to
issue an opinion as she did when the Pantagraph was going through
changes in 2002 and decided not to run area and local high school
graduate names any more. Editorial page editor, Bill Wills wrote
about her position on June 23, 2002, and put Shirley on the papers
"Most Valued Readers" list. The following year and to this day the
high school graduates names are back and running.

Shirley often said, "I married Don
for his money, he married me for my good look; we both got
gypped."

Online Condolences may be sent to
the family at kiblerbradyruestman.com

To send flowers to the family or plant a tree in memory of Shirley Ann Schrock, please visit our floral store.

To send flowers to the family in memory of Shirley Schrock, please visit our flower store.