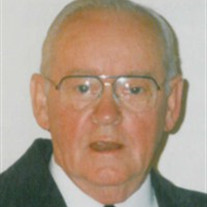 After battling
the effects of an aging body for three months, Stanley Burnett died
Friday afternoon May 10, 2013 at Martin Health Care Center,
Bloomington, his wife of 66 years at his side. He was 92 years
old.

Growing up
during the Great Depression and coming of age at the beginning of
World War II, Stanley was drafted into the United States Army in
1942 and two years later, on D-Day, June 6, 1944, entered Normandy
France with the second wave on Omaha
Beach.

That December,
he fought in the Battle of the Bulge, and from January until May
1945, trooped through Germany. He ended his service decontaminating
German bunkers. During his return trip back to the United States,
Stanley contracted infectious hepatitis and spent the holidays that
year in an Army hospital, returning to his parents' home in
January, 1946..

After returning
from the service and getting well again, he moved to another state,
got a job in the produce department of an A&P grocery store in
Matthews KY, and met Opal Jewel Sweeney.

They were
married Sept. 13, 1946, in Jeffersonville, IN., moved to
Indianapolis IN later that year, and two days shy of a year from
their marriage, became the parents of their only child, Pamela
Gale.

The following
year Stanley joined the A.E. Handschy Co.  as an
apprentice ink maker, a career he practiced until, as he said "I
took early retirement at the age of 83." In the meantime, he worked
as a journeyman ink maker for the company in Indianapolis,
Cleveland OH, 1956, and Chicago, 1957 until he retired in
1998.

In that year he
and Opal moved to Bloomington to be near their daughter, Gale
Keeran.  She died in 2001. Two years ago they
moved to Westminster Village in
Bloomington.

Among his
survivors are his widow Opal; a sister, Juanita Hinshaw; a nephew,
Phillip (Marcia) Strader; and nieces,  Margaret
Ann Rohloff and Susan Hoff, all in Indiana; and his son-in-law,
James Keeran, Bloomington. In addition to his daughter he was
preceded in death by a brother and six
sisters.

A memorial
service for Stanley will be held at 3 p.m. Wednesday, May 15,
2013 at Wesley United Methodist Church with the Rev.
Vaughn Hoffman officiating. In addition to the Wesley Church,
Stanley also belonged to the Young Men's Club of Bloomington, which
honored him recently as its oldest member.

Memorials may be
made to the Wesley Church or West Twin Grove Christian Church,
which the Burnetts also enjoyed attending.


Mrs. Burnett and those close to Stanley in the
last few months are grateful for the kind and loving care he was
given by the staffs of St. Joseph's Medical Center and especially
those at Martin Health Center.

Online
Condolences may be sent to the family at kiblerbradyruestman.com

To send flowers to the family or plant a tree in memory of Stanley F. Burnett, please visit our floral store.

To send flowers to the family in memory of Stanley Burnett, please visit our flower store.