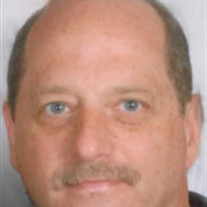 Bloomington, IL-Stephen "Steve"
Paul Bethea, 53, of Bloomington, passed away at 2:24 a.m.
Wednesday, March 13, 2013 at OSF St. Joseph Medical Center in the
emergency room. His funeral will be at 11 a.m. Monday, March 18,
2013 at East White Oak Bible Church in rural Carlock. Visitation
will be from 5-8 p.m. Sunday, March 17, 2013 at the church. Also a
memorial mass will be held at 1 p.m. Saturday, March 23, 2013 at
St. Patrick's Church of Merna. Memorials may be made to the
Samaritans Purse, Compassion International, or to the donor's
choice. Kibler-Brady-Ruestman Memorial Home in Bloomington is
assisting the family with arrangements.


He was preceded in death by his father.


Steve was a 1978 graduate of Central Catholic High School in
Bloomington and a 1985 graduate of the St. Louis College of
Pharmacy.


He was a well respected pharmacist in the Bloomington/Normal area,
and was an outdoors man who enjoyed fishing, camping, and hiking.
Steve will be deeply missed by all who loved him.


Online condolences may be sent to the family at kiblerbradyruestman.com.

To send flowers to the family or plant a tree in memory of Stephen "Steve" Paul Bethea, please visit our floral store.

To send flowers to the family in memory of Stephen Bethea, please visit our flower store.