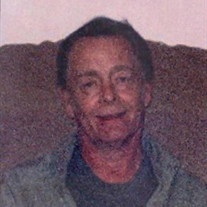 
He was preceded in death by his parents and one brother,
Carl.


Stephen worked in the maintenance department at Parsons Co.
He was an avid fisherman and hunter.  He was a member of the
North American Hunting Club. Stephen enjoyed time spent with his
family and grandchildren.


An Army veteran, he served during the Vietnam War where he
received the Army Accommodation medal and Bronze Star. He was a
member of the Roanoke American Legion Post #463.


Memorial graveside services with military rites will be held at
10:00 am on Thursday, April 18, 2013 at Roanoke Township
Cemetery.  Dwight Winnett will officiate.
Knapp-Johnson-Harris Funeral Home in Roanoke is assisting the
family with arrangements.


The family wishes to express their deepest gratitude for all the
support of Illinois Cancer Care and Hospice Compassus.


Memorial contributions may be made to the family.  Online
condolences may be sent to the family at
knappjohnsonharris.com.

To send flowers to the family or plant a tree in memory of Stephen Hasty, please visit our floral store.

To send flowers to the family in memory of Stephen Hasty, please visit our flower store.