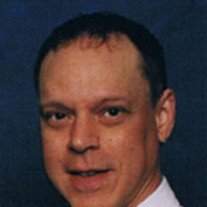 Stevin was born September 13, 1963 in Bloomington to Darlene
Herald Koberlein.

He was a 1981 graduate of Bloomington High School.  He was
previously employed for the Alamo II Bookstore in Normal.  He
had resided in Georgia for the last 10 years where he worked as a
librarian.  He had a vibrant personality and could impersonate
Donald Duck.  He was an avid piano player and traveled with
the Singing Taylor Family.  He had a love of music and
throughout his life performed in weddings and many venues,.

He will be sorely missed by his family and friends of Illinois
and Georgia and his long time friend for 30 years, Steven
Eades.

Online condolences may be sent to the family at
kiblerbradyruestman.com

To send flowers to the family or plant a tree in memory of Stevin P. Herald, please visit our floral store.

To send flowers to the family in memory of Stevin Herald, please visit our flower store.