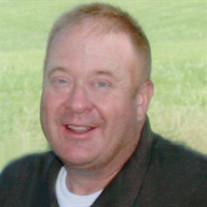 Terry was born Jan. 28, 1964 in Peoria, IL the son of Donald and Jane (Selman) Schroeder. He married Cindy Harms on August 17, 1991 in Benson, IL and was the proud father of twin sons Donny Lee and Dylan Dean.

He is survived by his son, Donny; mother, Jane Schroeder of Peoria; sister, Kelley J. Schroeder of Peoria; his father and mother-in-laws, Gary and Janet Harms of Benson; sister-in-law, Debbie (Mark) Sullivan of Benson; brother-in-law, Gary (Stephanie) Harms of Roanoke and many aunts, uncles, nieces, nephews and cousins along with many, many friends.

He was preceded in death by his wife Cindy and son Dylan, father Donald Schroeder and grandparents Carl and Eliza Selman and Herman and Alma Schroeder.

He served his community as a member of the Sons of the American Legion, St. Paul Lutheran Church Board, Benson Fire Department and the Benson Park Board.

He loved activities with his family including boating, fishing, ATVing, golfing and attending his son's sporting events.

Terry was an exceptional and loving father, husband, son, brother, uncle, cousin and nephew. He was extremely generous and helpful to all. He was a friend to everyone, loved by all and will be missed by those who knew him.
Funeral services will be held at 11:00 am on Tuesday, July 29, 2014 at the Benson Park. Pastor Nathan Feig will officiate. Business casual attire is appropriate for the service. Visitation will be held on Monday evening from 3-7 pm at the Knapp-Johnson-Harris Funeral Home in Roanoke. Burial will be in Clayton Township Cemetery in Benson.
In lieu of flowers and gifts, memorials may be made to an education fund established for Donny Schroeder in care of Flanagan State Bank. Online condolences may be sent to the family at knappjohnsonharrisfuneralhome.com.

To send flowers to the family or plant a tree in memory of Terry Schroeder, please visit our floral store.

To send flowers to the family in memory of Terry Schroeder, please visit our flower store.