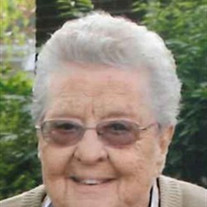 
She was preceded in death by her parents, one son, Eddie
Moreland, three brothers and one sister.


She worked for 10 years at the Apostolic Christian Restmor in
Morton later she worked at General Electric in Bloomington for 15
years retiring in 1985.


Thelma was of the Baptist faith.


Graveside services will be held at 11a.m. on Tuesday, December
31, 2013 at  Olio Township Cemetery in Eureka, IL.
Pastor  Danny McCubbins will officiate. There will be no
visitation. Argo-Ruestman-Harris Funeral Home in Eureka is
assisting the family with arrangements.


Memorial contributions may be directed to Eureka Food Pantry or
Heart House in Eureka. Online condolences may be sent to the family
at www.ruestmanharrisfuneralhome.com.

To send flowers to the family or plant a tree in memory of Thelma Moreland, please visit our floral store.

To send flowers to the family in memory of Thelma Moreland, please visit our flower store.