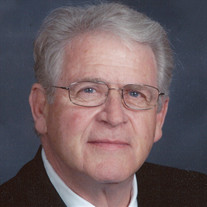 Roanoke- Thomas Marvin Evans, 73. of Roanoke, IL formerly of Benson and Dahinda, passed away at 7:45 a.m. on Thursday, April 28, 2016 at his residence.
He was born on October 16, 1942 in Pontiac, IL a son of Marvin Walter and Dorothy Fischer Evans. He married Pamela Kay Turner on June 1962 at St. Paul's United Church of Christ in Minonk, IL. They were married 45 wonderful years. She passed away in October 2007. Later he married Janice Udulutch in September 2009 in LaCrosse, WI. She has been a blessing to Thomas and the whole family. She survives.
Also surviving is two sons, Darren (Teri) Evans of El Paso; Eric (Dawn) Evans of Gridley; one daughter Stephanie (Dan) Myers of Little Rock, AR; nine grandchildren, Kayla, Megan, Allison, Thomas, Haley, Adam, Zachary, Abygail, Alyssa; three great grandchildren, Jaclyn, Jordan, and McKenna.
He was preceded in death by his parents, twin children, Mark and Michelle, two brothers Harold and Dale; and step-father, Ed Van de Veer.
Thomas was a self employed businessman and a snow plow expert. Since the mid 70's he started working with the Hoyle Road Equipment. Early in the 90's he started working with the Wissmiller and Evans Road Equipment.
He was a member of the Army National Guard in the late 50' s and early 60' s.
Thomas was a member of NRA, American Legion Post #463 in Roanoke and a member of the Secor Sportsmans Club.
He was a Woodford County Precinct Committeeman from 2005-2011. He was a passionate Woodford County Board Member from 2002-2012.
He was a member of St. Peter Lutheran Church where he served on the church council in the mid to late 70's.
He was a loving husband, father, grandfather, great grandfather, uncle and friend to many.
Tom never knew a stranger and was a friend to all and lived by the Golden Rule.
Funeral services will be held at 11:00 a.m. on Tuesday, May 3, 2016 at St. Peter Lutheran Church in Benson. Pastor Gabriel Baumgardner will officiate. Visitation will be held from 5-8 p.m. on Monday, May 2, 2016 at the Knapp-Johnson-Harris Funeral Home in Roanoke and also one hour prior to services at the church on Tuesday. Burial will be in St. Peter Lutheran Cemetery where military rites will be accorded at the grave.
Memorials may be directed to American Red Cross or Veterans Administration .Online condolences may be sent to the family at www.knappjohnsonharris.com.


To send flowers to the family or plant a tree in memory of Thomas Marvin Evans, please visit our floral store.

To send flowers to the family in memory of Thomas Evans, please visit our flower store.