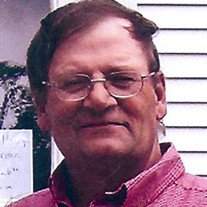 He was preceded in death by his
parents and one daughter, Mindy Ann.

Tim was previously employed by the
City of Minonk and American Buildings Company in El Paso.

He was a charter member of North
American Fishing Club.

Tim was loved by his family, had a
great sense of humor and was adored by his granddaughters. He
enjoyed his time working for the City of Minonk.

Funeral services will be held at 11
a.m. Saturday, June 22, 2013 at Ruestman-Harris Funeral Home in
Minonk with Rev. Dr. Tim Smith officiating. Visitation will be from
4-8 p.m. Friday, June 21, 2013 at the funeral home. Inurnment will
be at Centennial Cemetery in Secor.

Memorial contributions may be made
to the Shriners Children's Burn Hospital. Online condolences may be
sent to the family at
www.ruestmanharrisfuneralhome.com.

To send flowers to the family or plant a tree in memory of Timothy L. Hovey, please visit our floral store.

To send flowers to the family in memory of Timothy Hovey, please visit our flower store.