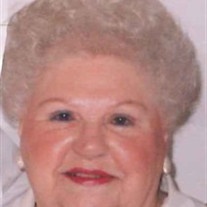 
She was preceded in death by her parents; two sisters, Lena and
Helen; an infant brother; and one grandson, Shane Akins.


Velma had worked various jobs throughout her life in the St. Louis
area last working as a manicurist before retiring in 1985.


Velma held a special place in heart for the Marine Corp.  She
was a huge supporter to the Marines during the Vietnam War and was
recognized for her support and dedication by being named an
Honorary Marine.


A Celebration of life will be held at 11:00 am on Tuesday March 11
at the Argo-Ruestman-Harris Funeral Home in Eureka. Doane Brubaker
will officiate.  Cremation rites will be accorded and burial
of ashes will be in Jefferson Barracks National Cemetery in St.
Louis, MO.


In lieu of flowers, memorial contributions can be directed to the
American Diabetes Association.  Online condolences may be sent
to the family at www.ruestmanharrisfuneralhome.com

To send flowers to the family or plant a tree in memory of Velma Akins, please visit our floral store.

To send flowers to the family in memory of Velma Akins, please visit our flower store.