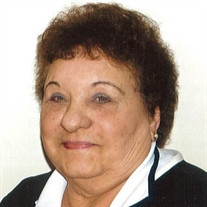 She was preceded in death by her parents; one son, Dale Bill; two brothers; and four sisters.

Verda was a great wife, homemaker, mother and grandmother. She was very crafty and she enjoyed card playing.

She was a member of the Trinity Lutheran Church in Roanoke.

Private family graveside services will be held at 2pm on Thursday at the Roanoke Township Cemetery for immediate family only. Pastor Bruce Scarbeary will officiate. The service will be available to the public via livestream and afterwards on the Knapp-Johnson-Harris Funeral Home Facebook page.

Memorial contributions may be directed to the Central Illinois Riding Therapy for persons with disabilities at 305 Neumann Drive East Peoria, IL 61611. Online condolences and tributes may be made to the family at knappjohnsonharris.com.

To send flowers to the family or plant a tree in memory of Verda Joyce Bill, please visit our floral store.

To send flowers to the family in memory of Verda Bill, please visit our flower store.