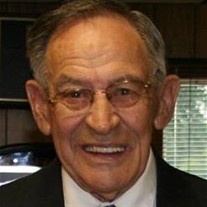 Peoria Heights-Victor Henry Wagner, 89, of Peoria Heights, formerly of Roanoke, IL passed away on Monday, January 26, 2015 in Peoria. Victor was born July 6, 1925 at his family's home in Roanoke, IL to Henry and Della (Hudson) Wagner.

He married Delores Sommer on January 19, 1947 in Peoria. They just celebrated their 68th wedding anniversary. She survives.

He was the father of eight children of which six survive: Rick Wagner of Peoria Heights; Daryl and Carol (Sarver) Wagner of Chillicothe; Jeff and Vicki (Wagner) Bilsland of Peoria; Robert and VaNessa (Wagner) Martin of Tremont; Roger and Damara (Wagner) Mohn of Germantown Hills; and Nathan and Michelle (Horstmann) Wagner of Peoria. One sister, Rachel Davison of Eureka also survives. He was a grandfather to sixteen grandchildren and thirteen great-grandchildren who loved him dearly.

He was preceded in death by his parents, five sisters, one brother and two children, Delene Wagner and David Wagner.

He left the family farm outside of Roanoke to join the U.S. Navy in 1943, serving on the USS Tripoli during World War II. After being discharged, he went to work for the Northern Regional Laboratory in Peoria. When his work there was finished, he returned to farming with his father and brother. He eventually went into the construction industry as a skilled carpenter and contractor with his brother David, constructing many homes and barns throughout the area.
His great construction knowledge took him many places, such as the Navel Air Base in Alameda, California and to Vail, Colorado to build "Vail Village." Upon his return to Central Illinois, he went to work for Kent Westside Lumber Company in Bloomington, IL, where he worked for 14 years. He was also heavily involved with the Civil Air Patrol during the 1960's and 1970's where he retired as a Captain. He then went on to start a construction/woodworking business with his son David in Roanoke until David's departure to Southern Illinois University - Carbondale, IL.

In his retirement, he owned and operated M & M Grocery in New Windsor, IL with Delores. They then returned to Peoria to be near family and friends.

He never truly retired as he helped many family and friends with construction projects until he was 82 years old. The only thing that stopped him was a fall resulting in a broken hip.
He was always willing to help anyone if it allowed him to swing a hammer.

One of the projects he was most proud of was being a part of the construction of the American Legion Post #463 in Roanoke, IL. Besides his love for woodworking, he enjoyed painting. Using both those mediums he constructed and painted a war memorial for the Roanoke American Legion, where he was made an honorary lifetime member.

His quick wit and contagious smile will be missed by all those who were lucky enough to be graced by them.

Services will be at 11am Saturday, January 31 at Knapp-Johnson-Harris Funeral Home in Roanoke, with visitation one hour prior to services. Burial with military rites will be in Secor Cemetery. Memorials may be made to the Roanoke American Legion Post #463. Online condolences may be sent to the family at www.knappjohnsonharris.com.


To send flowers to the family or plant a tree in memory of Victor H. Wagner, please visit our floral store.

To send flowers to the family in memory of Victor Wagner, please visit our flower store.