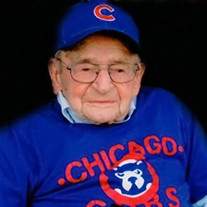 Virgil was born on February 12, 1915 near Francesville, IN to John C. and Alice Steffen Funk. He married Marie E. Grebner on February 1, 1941 in Kansas City, MO. She died on August 7, 2012 at the age of 93. Except for the WWII years, they spent their entire life together in Roanoke.

Much of his early life was spent living and working on family farms in central Illinois. Virgil graduated from Roanoke High School in 1933. He worked at the Altorfer Bros. Company (ABC) factory in Peoria from 1934-1941.

In 1941, Virgil enlisted in the US Navy and saw extensive action onboard a gunboat in the South Pacific including the invasion of Leyte in the Philippines. He was a member of the Roanoke American Legion Post #463. In 2011, at 96, he participated in a Veterans Honor Flight to Washington, D.C.

Soon after returning from military service, he was hired by Caterpillar Tractor Company, completed a two-year apprentice training program and spent a total of 32 years with the company before retiring in early 1977. For many years, Virgil also owned a tractor business in Roanoke, working for contractors and farmers and plowing gardens for locals.

Virgil and Marie were avid gardeners, fishermen, golfers and Cubs fans. He played baseball, both before and after the war for the Roanoke town team. Always fit, he also enjoyed hunting and active sports with family memembers.

He was a member of the St. Joseph Catholic Church and the Knights of Columbus in Roanoke.

In lieu of flowers, memorial contributions may be made to the Apostolic Christian Home or to St. Jude Children's Research Hospital. Online condolences may be sent to the family at www.knappjohnsonharris.com


To send flowers to the family or plant a tree in memory of Virgil L. Funk, please visit our floral store.

To send flowers to the family in memory of Virgil Funk, please visit our flower store.