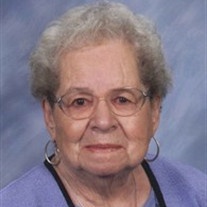 She was preceded in death by her parents, one daughter, Beverly
Hasenyager; one brother, Harlan Otto; and two sisters, Marjorie
Otto and LaVerne McClure.

Mrs. Argo was an active partner in the family owned businesses.
She and her husband owned and operated Argo Hardware in Danvers, IL
and later the Otto-Argo Funeral Homes, located in Danvers, Eureka,
and Carlock.

Virginia was a member of the Eureka Christian Church where she
had been active in the choir and a myriad of other church
functions. She was a member of the P.E.O. Chapter IQ, ENK, 4-G,
20th Century Club, Women's Club, Kaufman Park ladies league, Eureka
dance club, Eastern Star, and several bridge and pinochle
clubs.

She was also a Eureka College Delta Delta Pi Patroness and had
volunteered for the American Red Cross helping with their blood
drives.

Mrs. Argo was an experienced global and domestic traveler. She
was an avid reader and was well known for her baking and crewel
handiwork, as well as her love for entertaining.

She treasured her family with which she has been blessed with
and took special delight with time spent with her four great
granddaughters.

Memorial contributions may be made to the Eureka Christian
Church or to the Danvers Town Band. Online condolences may be sent
to the family at ruestmanharrisfuneralhome.com

To send flowers to the family or plant a tree in memory of Virginia G. Argo, please visit our floral store.

To send flowers to the family in memory of Virginia Argo, please visit our flower store.