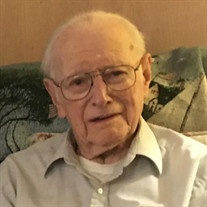 Walter graduated from Roanoke Victory High School in 1937 where he played basketball and ran track. Walter also attended Milwaukee School of Engineering. Walter was the last survivor to have been in the Roanoke coal mine.

Walter was privileged to serve in the Army during World War II. He was drafted on Jan. 17, 1941, & was one of the first to go from Woodford County. Walter was stationed in San Francisco with the Battery F 18th Coast Artillery. He went in as a Sea Coast Observer with a 1-year assignment. That all changed when Pearl Harbor was bombed. He remained in San Francisco 2 more years. He did jobs in the Army that no one else knew about. He ended up in Italy in 1945 with the 766 Field Artillery. While there, Walter was one of 6 soldiers who liberated a small village near Milan. When the war ended, he was in northern Italy near Lake Como. He faithfully served his country for 4 years & 9 months. He enjoyed his annual Battery F Army buddy reunions which took place for 50 years, until 2007. He was blessed to be part of a Land of Lincoln Honor Flight on June 14, 2011, with his daughter Mary as his guardian.

Upon his return to civilian life, Walter worked with his father, B. J. Fehr at his blacksmith shop in Roanoke. He was an honest, caring businessman who always went the extra mile for his customers for over 65 years. Other than his time in the military, Walter lived in Roanoke his entire life.

Walter's faith was a very important part of his life. He was a member of the Roanoke Apostolic Christian Church where he taught Sunday School & also worked in the Sound Room for many years. He also served his community faithfully: on the Village Board for 4 years; on the Roanoke Apostolic Christian Home Board for 4 years; on the Roanoke Park Board for 18 years; and on the Roanoke Township Board for 25 years, most of that time as Township Clerk. Walter was also active in Roanoke American Legion Post No. 463, last serving as Chaplain. He took two trips to Alaska that held special memories for Walter & Peach. On the 1984 trip, he drove "Captain Abishi", a 1972 Ford F-100 with a 240 ci six and a three on the tree.

Funeral services will be held at 10 a.m., Friday March 20, 2020, at the Roanoke Apostolic Christian Church with church ministers officiating. Burial will follow in the church cemetery.

Visitation will be from 4 to 7 p.m. Thursday, at Knapp-Johnson-Harris Funeral Home in Roanoke and from 9 to 9:45 a.m., on Friday, prior to the services, at the church.

Because of recent events concerning the Coronavirus, anyone who is elderly, sick, or is concerned with contracting the illness is encouraged to remain home with the understanding of the family. For anyone who is interested, the funeral service will be streamed live and will be available through the church's website at roanokeacchurch.org, by telephone 1-866-210-1669 Access Code: 9023904#, or through the AC Central app.

Memorials may be made to the Roanoke Apostolic Christian Home or Unity Point Hospice. Online condolences may be sent to the family at www.knappjohnsonharris.com

To send flowers to the family or plant a tree in memory of Walter Alvin Fehr, please visit our floral store.

Please click here to view the video tribute
To send flowers to the family in memory of Walter Fehr, please visit our flower store.