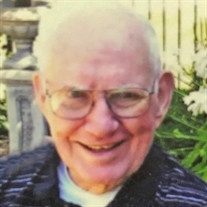 He was preceded in death by his parents, three brothers, Isaac, Edward, and Ben Fehr; two sisters, Doris Guingrich, Lois DesCarpentrie; and one great grandson.

An Army Air Corp veteran, Bill served his country in WWII. He was a member of the Roanoke American Legion Post #463.

A lifelong farmer in the Roanoke area, Bill also was the postmaster in Roanoke for 23 years. He served on the Roanoke-Benson School board for numerous terms, serving in the capacity as president for some of those years.

He was a member of the Roanoke Apostolic Christian Church where funeral services will be held 10:00 a.m. on Friday, August 25th. Church ministers will officiate. Visitation will be held on Thursday from 4-7 pm at Knapp-Johnson-Harris Funeral Home in Roanoke and from 9 - 9:45 am on Friday prior to the services at the church. Burial will be in the church cemetery.

Memorial contributions may be given to Apostolic Christian Home of Eureka.

Online condolences may be sent to the family at knappjohnsonharris.com


To send flowers to the family or plant a tree in memory of William Fehr, please visit our floral store.

To send flowers to the family in memory of William Fehr, please visit our flower store.