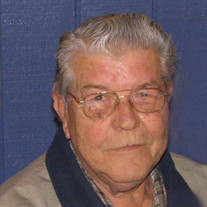 Bill was born April 26, 1933 in Sparland, Illinois to George F. and Lillian Hunt Jarrad. He married Marianne R. Sansone on August 30, 1952 in Denver, Colorado. They enjoyed 46 years of marriage before she preceded him in death in 1998. He married Sharol L. Martin on March 17, 2000 in Eureka. She survives. Also surviving are two daughters, Sandra (Rick) Durham of Charleston, IL and Cynthia (Jeffery) Schwiderski of Toluca, IL; two stepchildren, Chrystal Barnes of Marshfield, MO; and Patrick Sprague of Seymour, MO. Bill leaves four grandchildren, six stepgrandchildren and one great grandchild.

Bill was preceded in death by his parents, two sisters and his brother.

Bill graduated from Roanoke Victory High School in 1951, following an outstanding prep career as a pitcher. He continued to use his talents in baseball and photography while serving his country in the United States Air Force from 1952-56 during the Korean War. Bill returned to Illinois following his service and worked for 31 years for Caterpillar Tractor Company, first as an assemblyman and then as a police officer. Bill also worked for the City of Roanoke as a police officer in the 1960's. He was a member of American Legion Post #463 and a parishioner of St. Joseph Catholic Church in Roanoke, where he was a member of the Knights of Columbus.

Bill's love of the outdoors was known to all. He participated in fishing, hunting, riding his scooter, and enjoying nature with his family and friends. Bill was an adoring father to his daughters and a proud grandfather to his grandchildren, whether it was teaching them to fish or watching their school events. He had a deep faith in God and approached life with a stewardship for His creation that will be an everlasting memorial for all who knew him.

Visitation for family and friends will be held at Knapp-Johnson-Harris Funeral Home in Roanoke from 5 to 7 pm on Friday, January 2nd, with Rosary at 4:45 pm. A funeral Mass will be held at 10 am on Saturday, January 3rd at St. Joseph Catholic Church in Roanoke. Burial with military rites will follow at Roanoke Township Cemetery. Memorials may be made to the Apostolic Christian Home of Roanoke.

To send flowers to the family or plant a tree in memory of William H. (Bill) Jarrad, please visit our floral store.

Please click here to view the video tribute
To send flowers to the family in memory of William Jarrad, please visit our flower store.