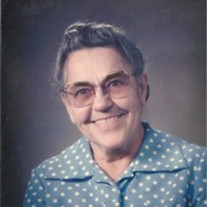 She was preceded in death by her parents; one daughter-in-law,
Debbie Fischer; 3 brothers; and 2 sisters.

Wilma was a homemaker all her life and also had worked at the
Apostolic Christian Home for many years in the housekeeping
department and the kitchen. She had also worked for Rollie's
Kountry Kitchen in Roanoke.

She loved to be outdoors working in her garden. She was
especially known for her beautiful flowers and her flower gardens.
Wilma truly loved to spend time with her family, especially her
grandchildren. She will be missed by those that she touched.

Wilma was a member of the Apostolic Christian Church in Roanoke,
where funeral services will be held at 10:00 am on Saturday, July
13, 2013. Church ministers will officiate. Visitation will be held
on Friday evening from 5-7 pm at Knapp-Johnson-Harris Funeral Home
in Roanoke and from 9-9:45 am on Saturday at the church. Burial
will be in the church cemetery.

Memorial contributions may be made to the Apostolic Christian
Home of Roanoke, St. Jude, or the American Diabetes Association.
Online condolences may be sent to the family at
www.knappjohnsonharris.com.

To send flowers to the family or plant a tree in memory of Wilma W. Fischer, please visit our floral store.

To send flowers to the family in memory of Wilma Fischer, please visit our flower store.